The Rainbow of Death—By Diabetes

The first Schibsted Testing Fixit on June 22, 2017 was a success! And it inspired some people in ways I couldn't have imagined.

An early critical mass of Instigators definitely got a dose of Fixit Fever this week. Schibsted’s first Testing Fixit this past Thursday, June 22, 2017 brought the Schibsted Testing Grouplet and its mission to the attention of nearly the entire company. There were at least 80+ participants and organizers across at least a dozen offices who not only wrote tests, fixed tests, or joined the Schibsted Test Certified program, but who also delivered or attended 27 talks or workshops. I say “at least” because this data comes from a survey we’ve asked participants to complete afterwards, and the numbers are still coming in.

Not a bad first showing at all, all the more considering that the Schibsted Testing Grouplet didn’t exist before early May, and heard the word “Fixit” for the first time very shortly thereafter! Feedback was very positive, and the organizers are already thinking ahead to how to have a bigger and better Fixit next time!

I’ll have to check on getting permission to share more photos from the various offices, and I’ll write another report on my Schibsted experiences after I return to the U.S., but there’s one thing I can’t wait to share with everyone, an example of the profound creativity that so often emerges once a community of Instigators bands together. Courtesy of LJ Musselbrook and Anna Maridal in London, may I share with you, “The Rainbow of Death—By Diabetes”: 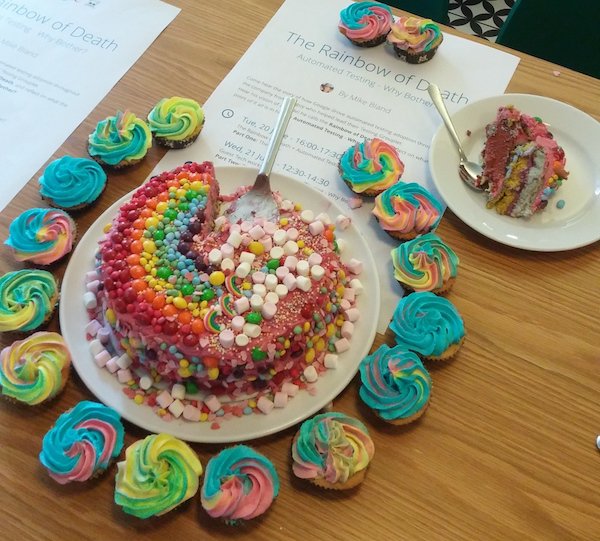 “The Rainbow of Death—By Diabetes” cupcakes by LJ Musselbrook and cake by Anna Maridal. Click for a larger image. 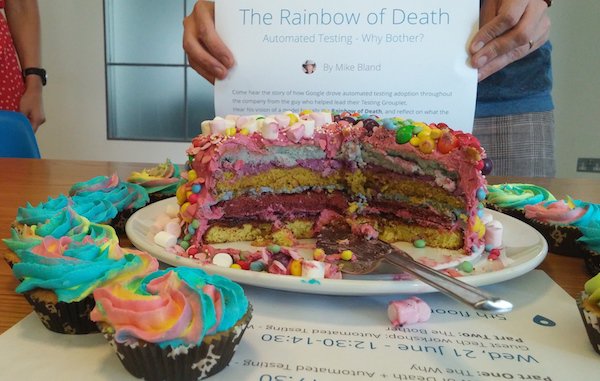 Side view of “The Rainbow of Death—By Diabetes” cupcakes by LJ Musselbrook and cake by Anna Maridal. Notice the little skulls and crossbones on the cupcake wrappers. Click for a larger image.