Where in the world am I?

For most of this time, I've been working in Barcelona with my first paying client, started a new project, wrote a new talk, and have been touring across Europe.

Clearly, I need a process for posting updates more regularly, as I’ve lots to report. I’ve been fortunate, thanks to Sverre Sundsdal introducing me to Luis Peralta, to work with my first paying customer: the Engineering Productivity team at Schibsted Products and Technology in—believe it or not—Barcelona. Yep, somehow it called me back for another long-term visit, and it still feels almost as comfortable as home.

I got a gig! Or, déjà vu all over again

What am I doing here? Turns out Luis and EngProd are on a mission to drive adoption of automated testing throughout Schibsted, they’ve gained a lot of inspiration from the Testing Grouplet’s story and methods, and they figured I might help generate some real momentum behind their initiatives. I spent from April 15th to May 14th in Barcelona, getting to know the team and supporting their own Schibsted Test Certified and Schibsted Testing on the Toilet initiatives that Kenneth Ocklund almost single-handedly got started—initiatives they were already planning before even talking to me.

During the course of my stay, I ended up starting a new project, URL Pointers—who knew there wasn’t an existing Open Source custom link server? (YOURLs only does generated links, not custom, apparently)—and wrote, yes, after all this time, a new talk to introduce the fundamentals of automated testing and why it’s important, called Automated Testing—Why Bother?.

Part one is The Why, or all the reasons we should be testing; part two is The Bother, or the basics of how we should be designing, coding, and testing.

If you’re interested in helping review this new presentation, please send me a message! It’s still very much a work-in-progress, that can be enhanced and tightened-up.

By the way, no, I’m not breaching client confidentiality by identifying Schibsted as a client and discussing what we’re up to. Note Luis’s intro to my delivery of The Rainbow of Death at a public Meetup:

Video of The Rainbow of Death from the Microscope Barcelona Meetup on March 4, 2017.</p>

This version of the talk actually has the slides edited in, unlike the original delivery at DevOpsDays Baltimore 2017. 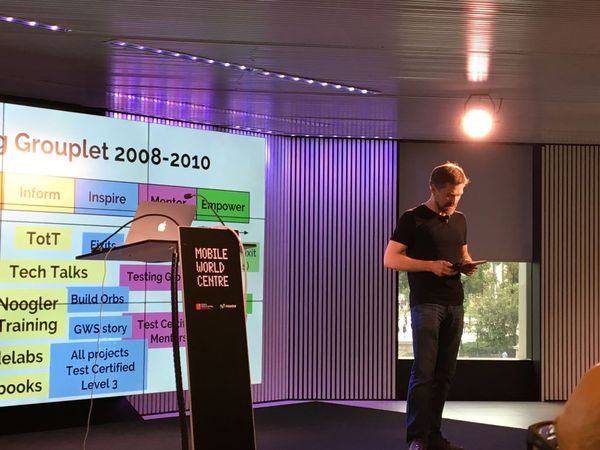 A still shot from the above delivery of The Rainbow of Death at Microscope Barcelona at the Mobile World Center in Barcelona, Spain on May 4, 2017. Click for a larger image.

Isn’t that wall of high-resolution monitors displaying the RoD a thing of beauty? If only I could have that behind me every time I give a talk…

You’ll never guess what then…

Towards the end of that first stay, I suggested to Luis that we create a Schibsted Testing Grouplet to build a Schibsted-wide community to support these efforts, instead of leaving EngProd to shoulder the entire burden. At the same time, it would aim to spread ownership of all the initiatives across the company, encouraging a diversity of ideas and increasing buy-in from developers.

Luis fully agreed, and I somehow managed to not only recruit a bunch of testing Instigators from EngProd and other offices, but to impose upon them that we should try to run a Testing Fixit on June 22! I figured it’d be the perfect way to raise the visibility of the new Grouplet, to attract Instigators from every office, and to put the automated testing movement on a solid foundation—basically, I hope it’ll produce the best possible return on Schibsted’s investment in my time.

So much to say about all that, but too much for one blog post. Suffice it to say that we’ve got a great crew with Toni Lopez in Barcelona and Nic Infante in London leading the Grouplet, Toni leading the Fixit, Jakob Alander in Stockholm leading Schibsted Test Certified, and other great Instigators such as Fabyanna Eriksson in Stockholm, Eric Lefevre-Ardant in Paris, Davide Giorgio in Milan, LJ Musselbrook and Claudio Palumbo in London, Jorge Millán and Saida Reyes in Mexico City, Henning Spjelkavik and Elvis Nuñes in Oslo, and so many more helping turn everything into a reality. (Really, you know I want to list everybody…I think I will once the whole engagement is finished!)

Rabbit holes all the way down

I returned home for about three weeks, and though I spent some of that time with friends, I spent waaaay too much of it not just hacking on my new URL Pointers project, but also trying to make the right thing easy for myself when it comes to frontend testing. Suffice it to say, there was pain, and I was driven to remove it as best I could…

I’ve documented all the rabbit holes I fell into in the Custom Links listing in my portfolio, in case you’re interested in following them as well. I think they’re really interesting and cool, at least. Damn sure learned a lot—maybe there’s something useful there for you as well!

Before I knew it, it was time to return to Barcelona on June 5th, and two days after returning I kicked off that “European Tour” I always dreamed of as a teenager. Of course, I’m not doing it the way I dreamed of—I’m speaking a lot rather than playing my Strats, and there’s a clear gender bias in my audiences (disappointing for multiple reasons)—but it’s still pretty damned cool.

Luis had from the beginning planned for me to travel to the different Schibsted offices to give talks to raise awareness of automated testing; but with the Grouplet forming and the Fixit as a goal, I’m not just blowing through town to talk about Google for a few hours and leaving town pretty much the same way I left it. Now, traveling with Toni Lopez:

Toni and I are halfway through this tour, and have visited leboncoin in Paris (June 8th and 9th), Subito in Milan (June 11th and 12th), Schibsted Spain in both Madrid (June 13th) and Sant Cugat del Vallès (June 16th), and both FINN.no and Schibsted Products and Technology in Oslo (June 14th and 15th).

Next week I visit the London office (June 20th and 21st), and will then join Toni, Fabyanna, Jakob, and others in Stockholm for the Fixit (June 22nd), returning to Barcelona on the 23rd. Then Toni and I are off to Schibsted Tech Polska in Krakow (June 25th to 27th), and finally to willhaben in Vienna (June 28th and 29th).

The details of what talks were given where are listed on my presentations page; I’ll of course add to it as the tour continues. Also, here’s a small bit of photographic evidence of my travels so far: 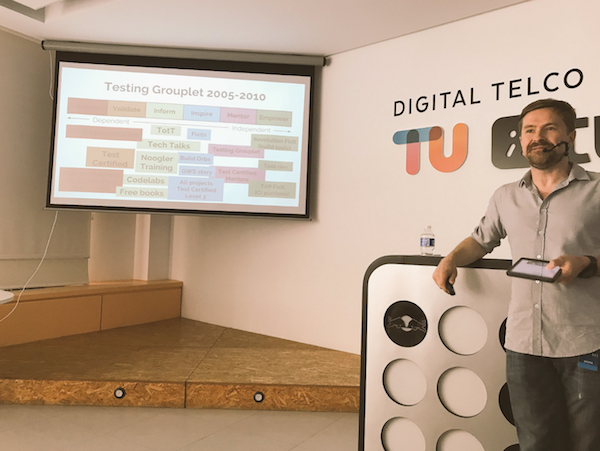 A still shot from the delivery of The Rainbow of Death at the Software Craftsmanship Madrid Meetup at the Tuenti office in Madrid, Spain on June 13, 2017. Click for a larger image.

If I look a little heavier than I was, that’s Italy’s fault. All the stereotypes about Italians and food are true! Lest you think I’m being unfair, I mentioned as much to them, and they proudly agreed. 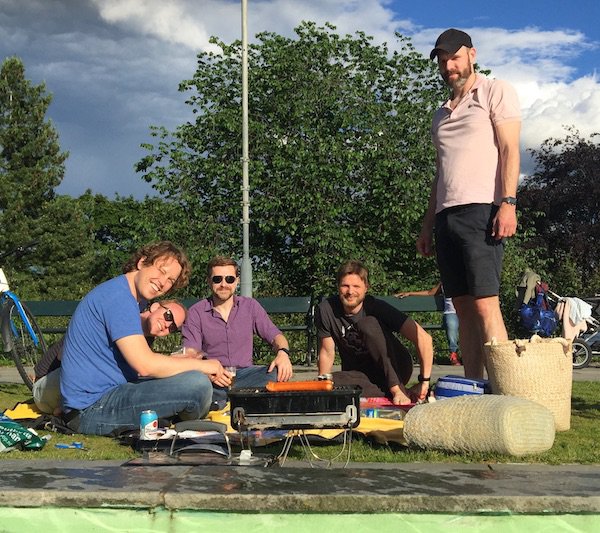 Enjoying a small cookout atop a hill in St. Hanshaugen Park with Sverre Sundsdal (left, in blue) in Oslo, Norway. I’m in the purple shirt and shades. Click for a larger image.

Yes, that’s Oslo. Norway. No snow. Instead: sunshine, green trees, T-shirts, and shorts. The bigger picture show the wading pool that Sverre’s girlfriend is standing in to take the picture. Seeing Oslo in the daylight (which lasted until after 10:30pm, by the way), it reminded me a lot of Virginia, believe it or not. At least it did that day, approaching the summer solstice. 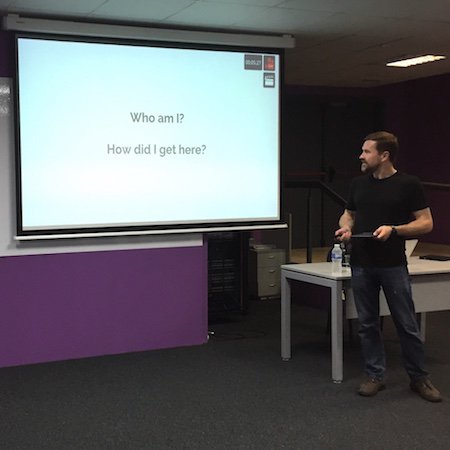 A still shot from the delivery of The Rainbow of Death at the Schibsted Spain office in Sant Cugat del Vallès, Spain on June 16, 2017. Click for a larger image.

Funny how it looks like I’m actually asking those questions of myself out loud. It’s also a not-terrible picture, taken from my good side! 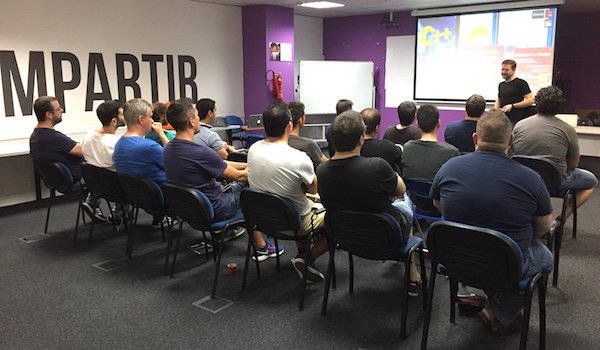 Another still shot from the delivery of The Rainbow of Death at the Schibsted Spain office in Sant Cugat del Vallès, Spain on June 16, 2017. Click for a larger image.

That purple room! How’d they know it’s my favorite color? Guess they understood it befits The Leo, and made arrangements accordingly. (No, I’m not seriously into astrology—but I am The Leo!)

In addition to the audience in that room the talks in Sant Cugat were also streamed for the Schibsted Spain internal development Meetup. Also, check out Schibsted Spain’s Open Source projects on GitHub!

We get back to Barcelona in time for farewell beers on June 29th, then I fly home on June 30th. Strangely, though I will not’ve spent that much time in Barcelona this trip, I think it’s going to be a little difficult to say goodbye to EngProd and to the city itself. However, I’m certain that at some point in time, I shall return.

After that, thanks to fellow Instigator Alan Kraft at the United States Patent and Trademark Office, I’ve been invited to speak at an internal DevOps event on July 11. Which talk? “The Rainbow of Death, USPTO Edition”. Much in the same vein as the “Schibsted Edition”, Alan’s helping pull together some Instigators in advance of the event to help review and provide input for the talk, so we can generate some momentum and report concrete details of how the RoD is already coming together at the USPTO!

The following week I may be helping out with DevOpsDays DC 2017 on July 17th and 18th, though that’s not yet certain. I won’t be speaking, however.

I don’t have other any paid gigs lined up yet, though I am talking with friends at a few companies and hope at least one of those conversations will bear fruit soon. So in the meanwhile, if you think you’d like to put me to work for your team or company, let’s talk!