My January 2015 Testing on the Toilet Flushy Award

I've been awarded a January 2015 "Flushy" award for being the first Xoogler (ex-Googler) to write Google Testing on the Toilet episodes.

Who said dreams can’t come true? Now, not only am I a published author, but I’m an award-winning author! 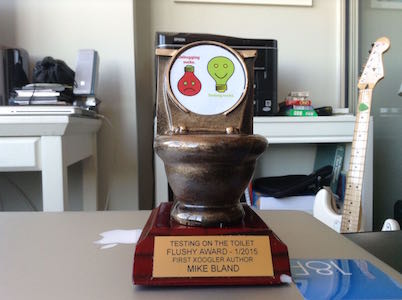 As for the reason behind this award, last year I wrote two Google Testing on the Toilet episodes that my friends on the inside were gracious enough to edit and publish, despite the fact that I wasn’t a Googler anymore: one about the Apple goto fail bug; and one about the OpenSSL Heartbleed bug. Though there are many to thank, Andrew Trenk and Jim McMaster were the principal folks that provided this opportunity. I have Andrew in particular to thank for thinking of me enough to ship this award to me here in Alexandria.

TotT is about to enter its ninth year of publication. Hard to believe that a goofy idea tossed out during a brainstorming session (that I was lucky enough to be a part of!) has become such a long-running institution. When those of us in the early days of the Testing Grouplet started writing episodes and posting them on the bathroom walls of Google offices in London, Zürich, and Mountain View, I don’t think any of us stopped and realized we were laying the foundation for a new institution. Goes to show you never know what’ll be a hit.