Hit the road pretty early; no Strat time, I’m afraid. But the plan is to stay a couple of days in Memphis, so I’ll make up for it. Hitting the road after oatmeal and a latte at Starbucks, the weather isn’t that great today, and I’ve been warned by my new contact in Memphis that I’d do well to stick to the speed limits while making my way through Tennessee. Fortunately, my driving habits are deliberately mellow these days, so when I see a Tennessee state trooper not thirty seconds after crossing the border, thirty seconds after the speed limit drops from 70 to 65, I don’t sweat it (too much).

The rain is bad in places, and the trucks kicking up mist while going nearly as fast as I am makes for a few interesting moments. Then there was one thick patch of fog that made me wonder whether I should abandon the compulsion to make progress and slow down enough that I could react in time if, say, a deer appeared in the middle of the lane. Before I could make this decision, however, the fog passed and the rain faded.

By and large, traffic is not bad in eastern Tennessee, and people aren’t too crazy. The landscape isn’t quite as scenic as western Virginia, hilly but not mountainous, but I do admit to being quite biased. I flip around on the radio quite a bit; until I get near Nashville, there’s slim pickin’s for Rock N Roll, or at least anything that isn’t religious or country, two genres that don’t really speak to me, and NPR is spotty. For a brief while, I cut off the radio and spell out dominant 7th chords around the Cycle of Fourths: C-E-G-Bb; F-A-C-Eb; Bb-D-F-Ab… Huh. The b7th of each chord is the 4th of the tonic it resolves to, i.e. of the next key in the cycle, e.g. Bb is the 4th of they key of F. Why have I never really noticed that? This is not musical rocket science.

At some point, however, I land on a religious station in between songs, and feel compelled to listen for a little while. It’s a long-form promotional bit of some sort with recordings of callers to King of Kings radio, each with a syrupy-thick accent, telling the station in most cases about how important God and Christ are to them and so forth. I wish I had my digital recorder in the front seat with me; I’ll do my best to reproduce some of what they said, or at least the gist of it:

My grandmother passed away before I was born, but she was prayin’ for me, and I know it had such an influence on my life…

My father was on his deathbed, and as he lay dyin’, he testified to me that he had finally been saved, and at the time I wasn’t saved yet…

Sometimes I feel like God isn’t with me, and I turn on your radio station, and I hear just the song I needed to hear, and I’m reminded that he is still here after all…

If you’re a preacher, don’t preach against alcohol, ’cause you’ll lose your flock. But tuhbacca (tobacco) is responsible for so many slow, painful deaths… And science has proven that you can grow two acres of sorghum for what it takes to grow one acre of tuhbacca, and it only takes one man to farm an acre of sorghum… I’d be happy if what I say can get just one person to put down those deadly, deadly, filthy cigarettes.

I’m really not doing justice to what I actually heard, and I can’t really get across the sincerity, and longing, and suffering in their voices in this medium. In many parts of the country, this kind of thing is taken as a sad joke, made into a spectacle of ignorance and stupidity. My take is, what I heard are good people, living the life they know, and reaching out to make a connection with other people, with society, out of some sincere concern for the welfare of others. They aren’t velvet-tongued preachers, or ultra-conservative politicians playing the Jesus card; nevermind that these folks might look up to such figures as leaders, for right or wrong. The point is, they’re just as human as the urbanites in NYC, as the geeks in Silicon Valley, as the academics in ivory towers or the people praying for peace in the terms of their own faith in war-torn lands. They’re just longing to be heard, to make a connection, to be understood. How many of us really try to understand those who look, sound, think, and live differently than us? How many of us think we’ve got the right answers, and lament the stupidity of the unenlightened masses that disagree with our objective, rational, logically unassailable worldview?

Eventually I found NPR again, and when they weren’t talking about Romney trouncing Gingrich in Florida, and all of the attendant gossip, there was talk about the Facebook Initial Public Offering filing. They expect to raise five billion dollars, with an overall valuation on the order of 100 billion or some such, I think I heard them say. Perhaps I would be less frustrated by that news if I didn’t feel that I understand why 800 million people are attracted to it, or if I felt attracted to it at all.

Religion, politics, technology, business: (nearly) everybody’s searching to be a part of the winning team. We measure and we compete to achieve the most impressive measurements. But do the things we measure matter? Certainly during my experience at Google, working as part of the Testing Grouplet and Fixit Grouplet, the cultural weight given to measurement combined with the difficulty of measuring the actual effects we wished to achieve led us to adopt imperfect-yet-quantifiable measurements with the hopes of achieving our true goals as a second-order effect. In that case, I believe we largely did achieve them, but not without some instances of ugly competitiveness and misinterpretation which occasionally obscured our goals. Now extrapolate that to systems of religion, government, and economics, and perhaps it’s clear that the majority of folks (and I’m not claiming complete immunity) naturally gravitate towards these systems of measurement and reward that tend to obscure and/or replace the beneficial effects that they were intended to produce.

None of this is new or particularly fresh insight. But I’m beginning to enjoy the fact that I can afford the time and distance to take my own participation in these systems into account, maybe get to a place where I won’t get fooled again. It’d be foolish not to take the chance while I’ve got it. In the meanwhile, I listen to the radio, and take solace in the fact that while the corruption that comes from meaningless measurement has produced much pollution throughout the airwaves, there are still many refreshingly clear glimmers of hope:

It was a beautiful day, the sun beat down I had the radio on, I was drivin’ The trees went by, me and Del were singin’ Little Runaway, I was flyin’

I stopped for lunch at a Wendy’s that was part of a Pilot gas station/truckers’ stop in Crossville. Heading first to the bathroom, I was rather tickled by what I saw: 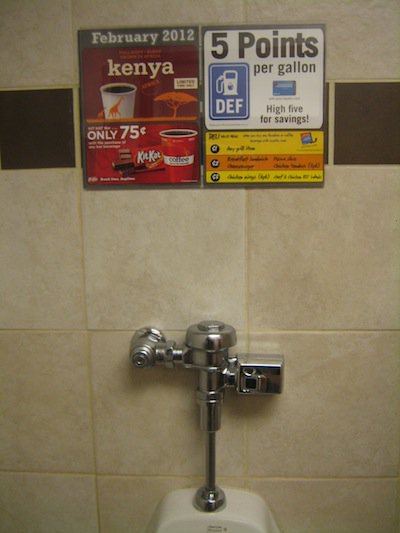 Looks like great minds think alike! But they have a double-wide plastic holders! Testing on the Toilet folks, check it out! Double the bandwidth!

Moving on, as I approached Nashville, the clouds parted and the sun shone, and the majority of the remaining drive to Memphis was glorious and relaxing. Why not make Nashville one of my stops? I don’t know. Somehow I’m more drawn to Memphis, the true birthplace of Rock ’N Roll; in my mind, I associate Nashville more with country, though Jimi did basically start his music career there after leaving the Army and running out of money to take a bus back to Seattle. I’ll save Nashville for a future trip.

For the first time, I used the Google Maps Navigation feature of my Droid to make my way to the Holiday Inn in Memphis. It worked well, and I’m so glad: About twenty miles outside of Memphis, the clouds returned, and there were a few, but very impressive, streaks of lightning crossing the sky, kissing the horizon. I’m used to thunderstorms—but in February?!? Thankfully the rain wasn’t too bad once I was actually in town, but I’m glad I had the phone to guide me exactly where I needed to go, given that I’d neglected to consult a map beforehand. This newfound reliance on technology is making me so lazy.

Once safe and dry inside my room, I pinged David, the friend of my friend David from Google, to see if we were still on for dinner at Central BBQ, apparently the best BBQ in Memphis. Being somewhat disappointed at the BBQ I’ve tried in NYC outside of the Google office, I couldn’t wait! Turns out that, like David is and like I used to be, David is a programmer, and he had a couple of production fires threatening to encircle him and cut him off from our evening plans. (Ah, I remember that life…) But, he said other folks were possibly up for joining us, and they could meet me even if he couldn’t.

I got to meet Ruby, Joey, and Nikka—and eventually David, thankfully!—at Central BBQ, and was delighted to have some real, down-home, Southern BBQ, and enjoy the warm company of friendly folk. They told me the Sun Studio, Stax, Graceland and Beale Street were all good picks, and added the Civil Rights Museum to my list, which I wasn’t aware of before. Growing up in an integrated South, yet hearing so much about the way things were, and bearing witness to faint reminders of those ugly times on occasion, I’m very proud and grateful that the Civil Rights movement did create a world where I and my friends are judged by the content of our character rather than the color of our skin—or at least, moreso than before. There’s a ways to go yet, for sure.

I’m planning on leaving by Friday evening, but if I decide to stay an extra night, the gang offered to possibly hang out with me then. (They have jobs, don’t’cha know.) I’m seriously thinking of taking them up on that. I’ve been driving a lot, and this seems like a fun, friendly town.